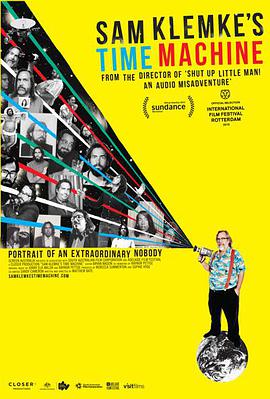 Since 1977, Sam Klemke has been recording himself on film, the #selfieavantlalettre. In that same ye

无需安装任何插件，即可快速播放
Since 1977, Sam Klemke has been recording himself on film, the #selfieavantlalettre. In that same year, NASA launched the Voyager with the Golden Record. Whereas NASA primarily sketches a positive picture of humanity, Klemke's honest self portraits zoom in on the individual. A special film about time, memory and what it means to be human.
‘This year will be my year, it has to be!’ Since 1977, Sam Klemke - a pioneer status updater - has looked back on ‘his year’ using video. With the illusion of progress, he hopes to encourage ‘personal growth and improvement’.
Documentary maker Matthew Bate met Klemke on Facebook and became acquainted with his video 35 Years Back Through Time, a super-cut in which Klemke counts backwards from 2011 to his ambitious teenage self. Intrigued by this obsessive film project, Bate used Klemke's personal archive to create a documentary collage that feels like an intimate road trip, with Klemke providing valuable lessons about time. Along the way, he dismantles the dream of success and happiness. Klemke's self-mockery and honesty give the whole thing a light, breezy feel.
Through this, Bate interweaves NASA’s Golden Record Project which, just like Klemke’s video project, was launched in 1977. This juxtaposition creates a reflection in which Bate sketches the comprehension of time and self-documenting stories as an inherent human need.